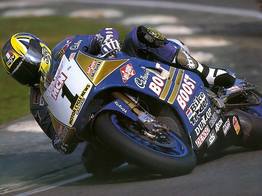 The Bike Bus was very proud to be booked by event organiser, Andy Freeman, to transport Niall Mackenzie's race bikes to and from the Beach Ballroom for the fabulous "Evening with Niall Mackenzie and Mat Oxley".

Initially, the booking was just for Niall's 1991 Yamaha France YZR500 Grand Prix bike, but then Andy got the go-ahead for us to collect another very special machine - the 1996 BSB winning Cadbury's Boost YZF750.  Each bike was secured in our customised LWB VW Crafter using our own unique strapping system, plus professional wheel chocks and soft ties.  With the Bike Bus's system it means that every bike, whether it be a rusty project, a beaten up learner bike or a priceless championship winning race bike, is treated with the same respect, care and attention to detail.  Why?  Because we're passionate about what we do!

With the bikes safely tied down, the tracker logging our route and the CCTV system switched on, the long journey north began.  The roads were appalling, with an hours delay on the A1 at Catterick, mud and slush on the twisty back roads through the Borders, and a generous helping of floodwater that had partially frozen across the roads!

Once the bikes were offloaded at the Ballroom, we discovered that Niall and Mat would be joined by Niall's son Taylor who just happens to be the current British Superstock 1000 Champion and Dennis Hobbs, 2014 Ducati Tri-Options Champion.  The guys very kindly autographed our copies of Stealing Speed and An Age of Superheros (both penned by Oxley) and joined us for a few photos and a chat, while Andy fined tuned things for the evening ahead.

The main sponsor of the event was Ecosse Motorcycles, Aberdeen, and with a selection of bikes from their showroom dotted around the hall, it was time for the doors to open.  The Bike Bus Team offered to help in any way that we could.....and we were handed a book of raffle tickets to sell!  We quite enjoy this sort of thing so set about collaring the audience and ended up selling the entire book of tickets - mind you, with prizes such as tickets to the Knockhill superbike round, a signed canvass of Mackenzie Senior, a Mal Maison voucher and an Ecosse gift voucher for £100....it was no hard task.

The evening was fabulous - the guys were all on stage chatting about the 500 two-stroke era of motorcycle racing, talking about the great names such as Gardner, Rainey, Schwantz and Mamola before chatting about MotoGP legends - Rossi, of course, and the current crop of racing wizards who slide the bikes round at eye watering speeds and angles - all four on stage agreed that Vinales is the one to watch for next year....

The evening was over all too soon, and at 5am the next morning, Driver #1 set off on a 500 mile trip south to return the bikes.

We would like to thank Andy Freeman for choosing to bookthebikebus@gmail.com and Niall, Mat, Taylor and Dennis for their brilliant company and autographs.  The final figures aren't out yet but the raffle is believed to have raised over £700 which will all go to the Archie Foundation, a local charity that helps over 170,000 sick children every year.
Proudly powered by Weebly